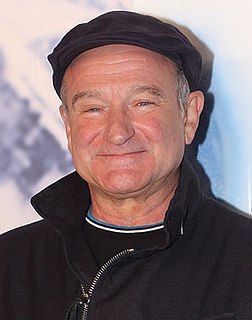 Robin McLaurin Williams was an American actor and comedian. Known for his improvisational skills and a wide variety of voices, he is often regarded as one of the best comedians of all time. Williams began performing stand-up comedy in San Francisco and Los Angeles during the mid-1970s, and rose to fame playing the alien Mork in the sitcom Mork & Mindy (1978–1982).