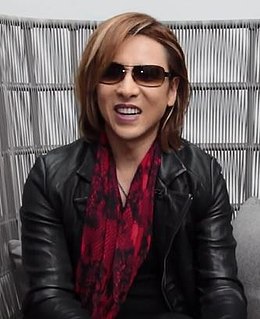 Yoshiki Hayashi known by the mononym Yoshiki, is a Japanese musician, songwriter, composer and record producer. He is best known as the leader and a co-founder of the visual kei rock band X Japan, for which he is the drummer, pianist and main songwriter. Described by Billboard as a "musical innovator" and named "one of the most influential composers in Japanese history" by Consequence of Sound, Yoshiki's solo career includes several classical studio albums and collaborations with artists such as George Martin, Bono, will.i.am, Jennifer Hudson, St. Vincent, Stan Lee, Roger Taylor and Brian May of Queen, Gene Simmons and KISS, Nicole Scherzinger, and Sarah Brightman.