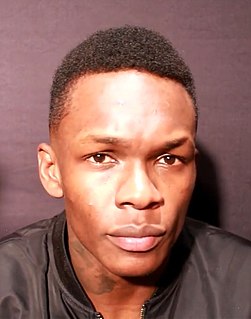 Israel Mobolaji Temitayo Odunayo Oluwafemi Owolabi Adesanya is a Nigerian-born New Zealand professional mixed martial artist, and retired kickboxer and boxer. As a mixed martial artist, he is currently signed to the Ultimate Fighting Championship (UFC), representing his native Nigeria, where he is the UFC Middleweight Champion and has an undefeated record of 20 wins and no losses. In kickboxing, he is the former Glory middleweight contender winner and King in the Ring two-time cruiserweight and heavyweight champion. As of 29 September 2020, he is #3 in the UFC men's pound-for-pound rankings. Adesanya is widely regarded as one of the best strikers in the world of mixed martial arts.