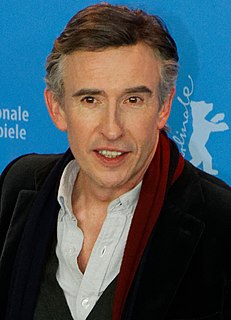 Stephen John Coogan is an English actor, voice artist, comedian, screenwriter and producer. He began his career in the 1980s as a voice actor on the satirical puppet show Spitting Image and providing voice-overs for television advertisements. In the 1990s, he began creating original characters. In 1999, he co-founded the production company Baby Cow Productions with Henry Normal.