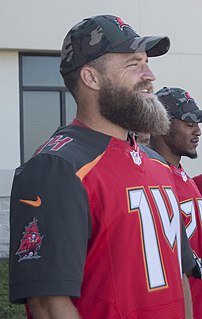 Ryan Joseph Fitzpatrick, nicknamed "Fitzmagic", is an American football quarterback for the Miami Dolphins of the National Football League (NFL). A journeyman, Fitzpatrick has started for eight teams during his 16-season career, the most of any NFL quarterback. He is the only player in NFL history to throw a touchdown pass with eight teams.