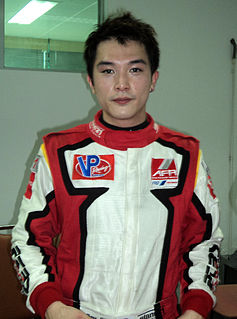 Roy Chiu is a Taiwanese actor, singer and racing driver. He made his debut in 2002 with the television series Starry Starry Night. In 2006, he was enlisted for his mandatory military service. He returned to acting in 2008 and rose to prominence three years later after appearing in the dramas My Daughter (2011), Waking Love Up (2011), and Office Girls (2011).