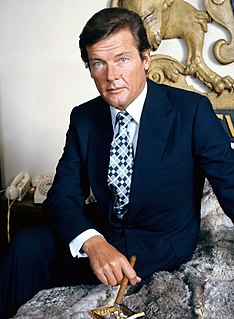 Sir Roger George Moore was an English actor. He is best known for portraying fictional secret agent James Bond in the Eon Productions film series, playing the character in seven feature films between 1973 and 1985. Moore was the third actor in the role, and his seven appearances as Bond, from Live and Let Die to A View to a Kill, are the most of any actor in the Eon-produced entries.