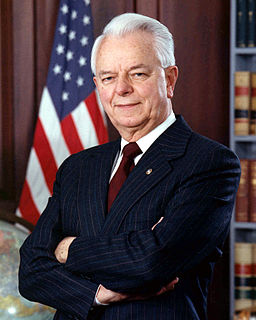 Robert Carlyle Byrd was an American politician who served as a United States Senator from West Virginia for over 51 years, from 1959 until his death in 2010. A member of the Democratic Party, Byrd also served as a U.S. Representative for six years, from 1953 until 1959. He remains the longest-serving U.S. Senator in history; he was the longest-serving member in the history of the United States Congress until surpassed by Representative John Dingell of Michigan. He was the last remaining member of the U.S. Senate to have served during the presidency of Dwight Eisenhower, and he was the last remaining member of Congress to have served during the presidency of Harry S. Truman. Byrd is also the only West Virginian to have served in both chambers of the state legislature and both chambers of Congress.