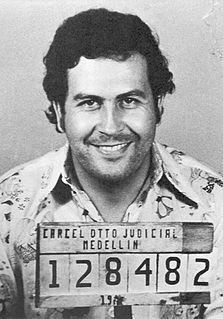 Pablo Emilio Escobar Gaviria was a Colombian drug lord and narcoterrorist who was the founder and sole leader of the Medellín Cartel. Dubbed "The King of Cocaine," Escobar is the wealthiest criminal in history, having amassed an estimated net worth of US$30 billion by the time of his death—equivalent to $59 billion as of 2019—while his drug cartel monopolized the cocaine trade into the United States in the 1980s and early 1990s.