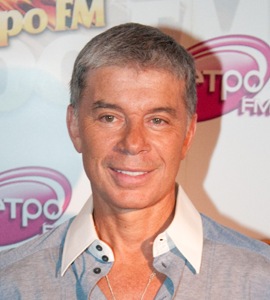 Oleg Mikhaylovich Gazmanov is a Russian pop singer, composer and poet, specializing in patriotic songs, as well as songs which cover more conventional pop/rock themes. Gazmanov is leader of pop group "Эскадрон" (Squadron). His songs have been covered by others in the chanson style, such as Mikhail Shufutinsky. He is also a Candidate for Master of Sport of the USSR in gymnastics and is well known for his acrobatics performed during live shows, especially at the beginning of his musical career in the early 1990s.