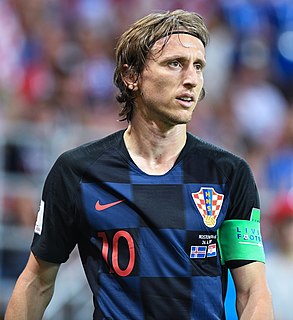 Luka Modrić is a Croatian professional footballer who plays as a midfielder for Spanish club Real Madrid and captains the Croatia national team. He plays mainly as a central midfielder, but can also play as an attacking midfielder or as a defensive midfielder, usually deployed as a deep-lying playmaker. He is widely regarded as one of the best midfielders of his generation, and the greatest Croatian footballer of all-time.