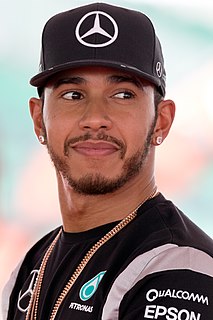 Sir Lewis Carl Davidson Hamilton is a British racing driver, activist, fashion designer and musician. He most recently competed in Formula One for Mercedes in 2020, having previously driven for McLaren from 2007 to 2012. In Formula One, Hamilton has won a joint-record seven World Drivers' Championship titles, while he holds the outright records for the most wins (95), pole positions (98) and podium finishes (165), amongst others.