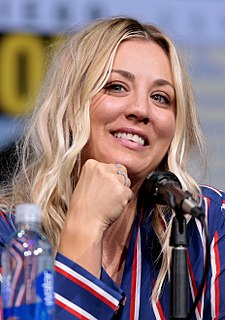 Kaley Christine Cuoco is an American actress and producer. After a series of supporting film and television roles in the late 1990s, she landed her breakthrough role as Bridget Hennessy on the ABC sitcom 8 Simple Rules (2002–2005). Thereafter, Cuoco voiced Brandy Harrington on Brandy & Mr. Whiskers (2004–2006) and appeared as Billie Jenkins on the final season of the television series Charmed (2005–2006). She later starred as Penny on the CBS sitcom The Big Bang Theory (2007–2019), and received Satellite, Critics' Choice, and People's Choice Awards for the role. Since 2020, Cuoco has starred in the HBO Max comedic thriller The Flight Attendant and served as its executive producer, which received widespread critical acclaim.