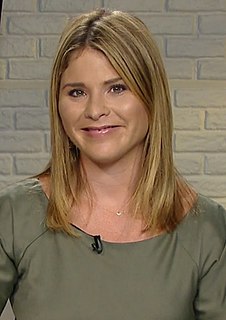 Jenna Bush Hager is an American news personality, author, and journalist. She is currently the co-host of Today with Hoda & Jenna, the fourth hour of NBC's morning news program Today. Hager and her twin sister, Barbara, are the daughters of the 43rd U.S. President George W. Bush and former First Lady Laura Bush. After her father's presidency, Hager became an author, an editor-at-large for Southern Living magazine, and a television personality on NBC, being featured most prominently as a member of The Today Show as a correspondent, contributor and co-host.