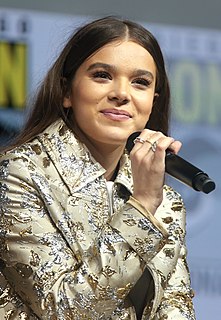 Hailee Steinfeld is an American actress, singer and model. She earned many accolades for her breakthrough role as Mattie Ross in the drama western film True Grit (2010), for which she was nominated for BAFTA Award for Best Actress as well as Screen Actors Guild Award and Academy Award for Best Supporting Actress, making her the ninth youngest nominee in category.