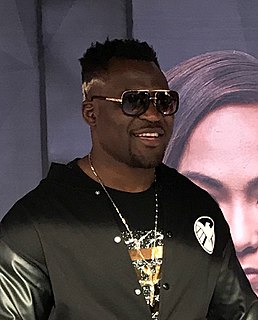 Francis Ngannou is a Cameroonian-French professional mixed martial artist competing in the Heavyweight division of the Ultimate Fighting Championship. He is known for being the hardest recorded puncher in UFC history and holds knockout victories over Alistair Overeem, Cain Velasquez, Junior Dos Santos and Andrei Arlovski. As of January 25, 2021, he is #13 in the UFC men's pound-for-pound rankings and as of 31 August 2020 #1 in the UFC heavyweight rankings.