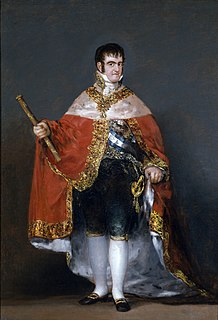 Ferdinand VII was the King of Spain during the early- to mid-19th century. He reigned over the Spanish Kingdom in 1808 and again from 1813 to his death in 1833. He was known to his supporters as el Deseado and to his detractors as el Rey Felón.