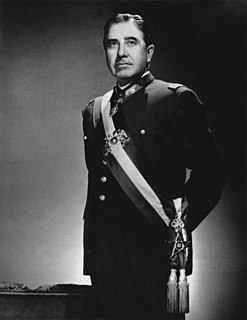 Augusto José Ramón Pinochet Ugarte was a Chilean Army General, politician and military dictator who ruled Chile from 1973 to 1990, first as the leader of the Military Junta of Chile from 1973 to 1981, being self-declared President of the Republic by the junta in 1974 and becoming the de facto dictator of Chile, and after from 1981 to 1990 as de jure President after a new Constitution, who confirmed him in the office, was approved by a referendum in 1980.