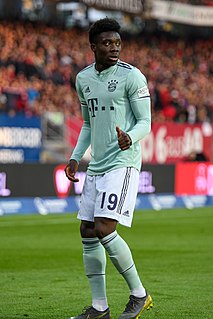 Alphonso Boyle Davies is a Canadian professional soccer player who plays as a left-back or winger for Bundesliga club Bayern Munich and the Canadian national team. He is widely considered a highly promising prospect in the media due to his combination of his explosive pace, acceleration, dribbling, flair, agility, feints, creativity, passing, and vision.