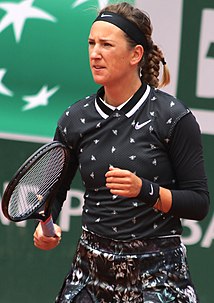 Victória Fyódorovna Azárenka is a Belarusian professional tennis player. Azarenka is a former world No. 1 in singles, having claimed the top ranking for the first time on 30 January 2012. She was the year-end No. 1 in 2012 and has held the top ranking for a combined total of 51 weeks. Azarenka has won 21 WTA singles titles, including two Grand Slam singles titles at the, becoming the first Belarusian player, male or female, to win a Grand Slam tournament singles title. Azarenka is also a three-time major finalist at the US Open, finishing runner-up to Serena Williams in both 2012 and 2013 and to Naomi Osaka in 2020. Her other important singles achievements include winning six Premier Mandatory tournaments, four Premier 5 tournaments, and the singles bronze medal at the 2012 Summer Olympics in London, as well as being the runner-up at the 2011 WTA Finals to Petra Kvitová, reaching three additional Grand Slam singles semifinals, and an additional nine major quarterfinal appearances. She finished with a year-end top 10 singles ranking for five consecutive years between 2009 and 2013.