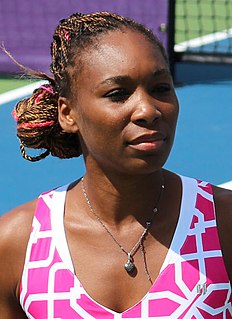 Venus Ebony Starr Williams is an American professional tennis player. A former world No. 1 in both singles and doubles, Williams is generally regarded as one of the all-time greats of women's tennis and, along with younger sister Serena Williams, is credited with ushering in a new era of power and athleticism on the women's professional tennis tour.