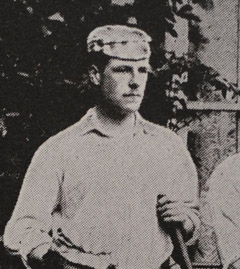 Robert Erskine Wade Copland-Crawford was a Scottish soldier and amateur sportsman. He served in the Afghan War from 1878 to 1880, and was mentioned in dispatches. He was later a police-officer in Sierra Leone, but ended his career in disgrace when he was imprisoned for causing the death of a native by flogging.