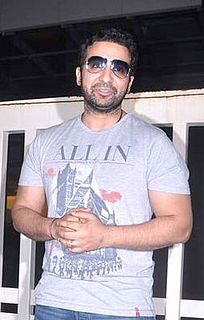 Raj Kundra is a British businessman. In 2004, he was ranked as the 198th richest British Asian by Success (magazine). His father, Bal Krishan Kundra was a middle-class businessman and his mother Usha Rani Kundra was a shop assistant when he was a child. Kundra has had various investment interests, including both cricket and mixed martial arts. He is married to Shilpa Shetty, a Bollywood actress, since 2009.