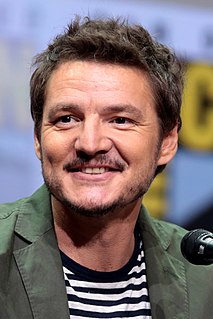 José Pedro Balmaceda Pascal is a Chilean-American actor. He began his career guest starring on various television shows before rising to prominence for portraying Oberyn Martell on the fourth season of the HBO fantasy series Game of Thrones (2014) and Javier Peña on the Netflix biographic crime series Narcos (2015–2017). Pascal has starred as the title character on the Disney+ space Western series The Mandalorian since 2019. Outside of television, he has appeared in the films The Great Wall (2016), Kingsman: The Golden Circle (2017), The Equalizer 2 (2018), Triple Frontier (2019), and Wonder Woman 1984 (2020), and We Can Be Heroes (2020).