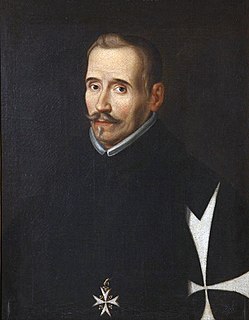 Lope Félix de Vega Carpio was a Spanish playwright, poet, novelist and marine. He was one of the key figures in the Spanish Golden Age of Baroque literature. His reputation in the world of Spanish literature is second only to that of Miguel de Cervantes, while the sheer volume of his literary output is unequalled, making him one of the most prolific authors in the history of literature. He was nicknamed "The Phoenix of Wits" and "Monster of Nature" by Cervantes because of his prolific nature.