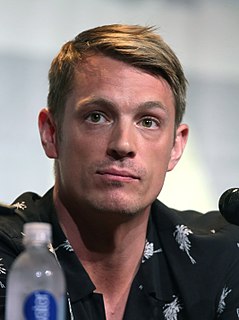 Charles Joel Nordström Kinnaman is a Swedish and American actor who first gained recognition for his roles in the Swedish film Easy Money and the Johan Falk crime series. Kinnaman is known internationally for his television roles as Detective Stephen Holder in AMC's The Killing, Takeshi Kovacs in the first season of Altered Carbon, and Governor Will Conway in the U.S. version of House of Cards. He has also played Alex Murphy in the 2014 RoboCop remake, and Rick Flag in the film adaptation of Suicide Squad (2016), based on the DC Comics anti-hero team of the same name. In 2019, Kinnaman starred in Hanna as Erik Heller and in For All Mankind as astronaut Ed Baldwin.