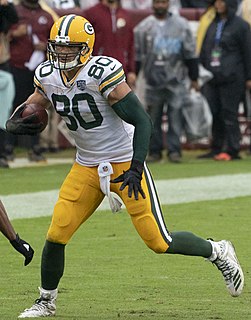 Jimmy Graham is an American football tight end for the Chicago Bears of the National Football League (NFL). He played only one year of college football at Miami, after playing four years of basketball. He was drafted by the New Orleans Saints in the third round of the 2010 NFL Draft. Graham has also been a member of the Seattle Seahawks and Green Bay Packers.