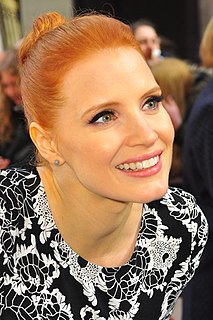 Jessica Michelle Chastain is an American actress and producer. Known for her roles in films with feminist themes, her accolades include a Golden Globe Award and nominations for two Academy Awards. Time magazine named her one of the 100 most influential people in the world in 2012.