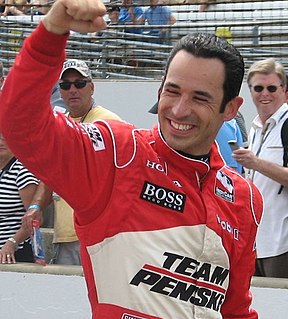 Hélio Castroneves, is a Brazilian auto racing driver. He won the Indianapolis 500 three times: in 2001, 2002, and 2009, and was runner-up in the IndyCar Series drivers' championship in 2002, 2008, 2013, and 2014. He won the IMSA WeatherTech SportsCar Championship in 2020. Castroneves began competitive go-karting at age 10, before progressing to car racing, in the Formula Chevrolet Brazil, Formula 3 Sudamericana, the British Formula Three Championship, and Indy Lights. He entered Championship Auto Racing Teams (CART) in 1998 with Bettenhausen Racing and with Hogan Racing in 1999, achieving one second place each with both teams. Castroneves moved to Team Penske in place of Greg Moore for 2000 and 2001, winning three races in both years.