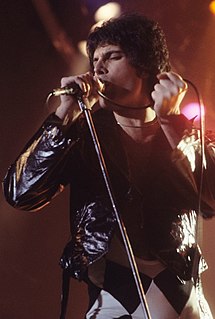 Freddie Mercury was a British singer, songwriter, record producer, and lead vocalist of the rock band Queen. Regarded as one of the greatest singers in the history of rock music, he was known for his flamboyant stage persona and four-octave vocal range. Mercury defied the conventions of a rock frontman, with his highly theatrical style influencing the artistic direction of Queen.