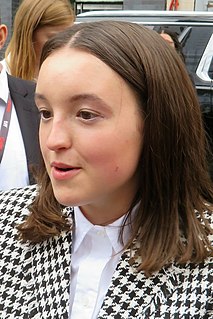 Isabella May Ramsey is an English actress and singer. She made her professional acting debut as the young noblewoman Lyanna Mormont in the HBO fantasy television series Game of Thrones; she is also known for playing the leading role of Mildred Hubble in the 2017 CBBC television series The Worst Witch. She is currently the voice of Hilda in the Peabody Award nominated Netflix series Hilda, based on the graphic novel by Luke Pearson.