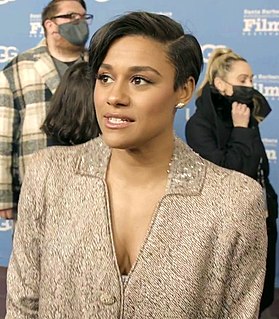 Ariana DeBose is an American actress, singer, and dancer, known for her work in musical theater, film, and on So You Think You Can Dance. She originated the role of The Bullet in the Broadway cast of Hamilton, and played Alyssa Greene in Netflix's The Prom, directed by Ryan Murphy. She can be heard playing director/choreographer Zoey Taylor in As the Curtain Rises, an original Broadway soap opera podcast from the Broadway Podcast Network.